Suppose we are building new project.

The simplest starting point will be just to create an web project and put everything inside.

But sooner or later we will realize that we also need some kafka consumers, cron jobs etc so we gonna need to have some kind of shared library.

In other words appearance of packages is just a matter of time.

And if we are started to use packages why not split them even more, to hide some low level stuff from high level components, e.g. imagine you have OrdersRepository and OrdersService in such case we do not want OrdersController to know about low level repository stuff, thats why we may want to split them even further.

Probably the simples and more famous way will be something like:

In reality if we will change Services to Domain, and Repositroies to Infrastructure nothing really wont be changed it is more about starting point and naming preferences.

In example I am using Services and Repositories by intent, because in dotnet we have ServiceProvider which responsibility is to provide services to us and that sound pretty clear and straight forward to me.

So our dependency graph is: Web <- Services <- Repositories 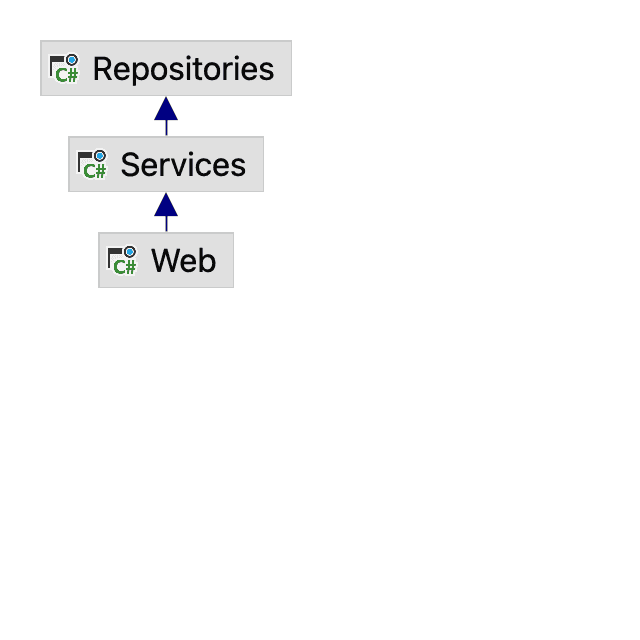 From Web project I have only IOrdersService and do not know nothing about actual implementations and can not inject it directly.

From a Services project I do not know nothing about Web, and in the same way know only about IOrdersRepository and not about its implementations.

With such setup following code wont even compile:

Because actual implementation is marked as internal and I can not use it outside, so I am forced to use interface instead.

But there is still one more problem, technically I still may do something like this:

Which is exactly the problem we wish to get rid off, imagine that in few years some new comer will decide that it is much easier for him to just inject orders repository and write something to storage, but he will bypass all rules in corresponding service which will lead to possible errors and makes mess.

To do this impossible in our Servicess project we should mark repositories as an private assets by adding PrivateAssets="All" attribute, so they wont be visible to anyone outside

Now from Web layer, I technically can not talk directly to Repositories bypassing Services - profit

Projects are using Microsoft.Extensions.DependencyInjection.Abstractions and extension class to register them selves in service provider

From Web we have:

Thanks for that in Web we have:

If you will try to visualize your current projects graph you may see something like: Web <- Infrastructure <- Domain, which looks weird and seems like it is not only has wrong direction but shuffled

Note about unit tests: to make internal classes withible to test projects you may want to add following in your project <ItemGroup><InternalsVisibleTo Include="Repositories.Tests" /></ItemGroup>

For now we have desired: Web <- Services <- Repositories

To avoid that we may add something like this in Web csproj:

And from now on if someone by mistake will decide to reference it - project wont even build and hopefully it will be a signal for engineer that he is doing something wrong.

So I did tried to create dedicated editorconfig for repositories with contents like this:

But have no luck

TODO: is there an rule or another way to enforce internal classes in project?

Ask yourself: If I will modify this class in this project - how many changes in other projects it will require?

If the answer is 0 - then this project is unstable, you are free to change it as much as you want

If the answer is quadrillion - then this project is stable, so probably no one want to touch it because it will require to rewrite the world

Project is resistant (stable) if it has no dependencies, but other projects depends on him (aka: it is hard to make changes inside, they will propagate)

Project is non resistant (unstable) if it depends on other projects but no one is depend on him (aka: it is easy to make changes inside, nothing will be propagated)

Usually projects will be somewhere in between (flexible), except the edges of project (storage, web, ...)

So we are in rule: less stable projects are depending on more stable ones.

Note that neither stable and/or unstable are not good not bad, at the very end we want everything to be flexible enough to evolve

Is is something like single responsibility principle but on upper level for projects.

Having that the answer to question: Should Sql/Elastic/Redis implementations live inside Repositories project should be obvious.

How can we add some flexibility to a very stable project? The answer is to use abstraction classes.

Stable project should be also abstract (consist of interface and/or abstract classes), so its stability does not prevent extensions and evolution.

Unstable project should be concrete, so it is easy to make changes.

SDP: I should decrease from top to bottom

with trial I was able to analyse all this

Note: NDepend calculates internal classes as well that's why numbers are different but overall the shape is same